During COVID all of our events are virtual and free. In place of our regular list of in-person events, we’re posting interviews with a variety of Musician, Member, Young Musician Profiles … so you can stay in touch.
​You can donate HERE. 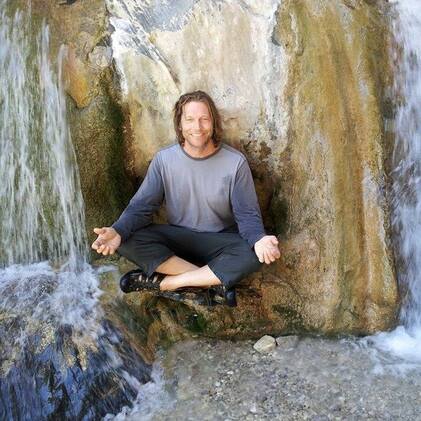 Allen Biggs
One of the generous supporters of the League, and the principal percussionist of the Santa Rosa Symphony for more than 30 years, is Allen Biggs. He has been featured at Festival of Parties events and at League luncheons to the on-going delight of audiences. Now like so many in the Symphony, he is grappling with the vagaries of sheltering-in-place, most recently entertaining his neighbors and his dog, Moofa, with a marimba concert in his driveway.
“The response was great,” said Biggs, who got several thank you cards in his mailbox, a bouquet of flowers, very nice works of art and a gift card to a local restaurant. “Connecting through music remains basic to the human experience, even in this remarkable time,” added Biggs, whose San Francisco State students are playing together on Zoom.
To keep himself centered, Biggs unplugs his phone and computer for at least 24 hours every weekend. He also goes to srisri.org/live at 7 every morning for a 30-minute lived guided meditation. “It is so relaxing and requires absolutely no experience or equipment. It is a great way to feel connected because over a million people are watching live.”
Bigg’s introduction to music began at age three when his mother received a Fulbright from San Francisco State to teach in Northern Spain. The family of six moved to Pamplona directly across from the building housing the famous bull ring.
“A student of my mother’s came to live with us,” he explained. "He was a wonderful guitarist and saw that I was captivated by his music. He made me a simple drum and that started me on my percussionist career!”
Biggs said being a percussionist allows him to play so many different styles of music – from Bach on the marimba (it gives him a lift), to the Broadway opening of “Wicked” in San Francisco, to playing with the legendary Dave Brubeck at the San Francisco Jazz Festival, and with his son, Matthew, at Yoshi’s Jazz Club.
His own band, Jamalicious, performs in our own area and beyond. “I love this band because we think as one musician. Maybe it is because we trust each other musically and there is a lot of spontaneity,” he said.
Perhaps unknown to Bigg’s musical fans are his work on MetLife and Volkswagen TV ads. He also has won two Grammy awards for his Lamentations and Praises CD.
Norma Brown married Corrick Brown in 1956 and they left for a year in Vienna where Corrick studied conducting and Norma studied piano and chamber music. When they returned to Santa Rosa, he became Music Director and Conductor of the Santa Rosa Symphony. The Symphony League was formed the next year.
In the early years the Symphony League filled many administrative rolls in the workings of the Symphony. Maggie Smith, a former Waves officer, and, later, Susan Nix ran the Symphony office. Phyllis Apfel solicited all the program advertisements; Diane Anderson served as orchestra librarian. The League put on a Viennese Ball at the Vets Memorial that is still being talked about.
Norma started the Symphony's chamber concert series in 1970, originally jointly sponsored by the college and the symphony, and presented in the Santa Rosa City Council Chambers. Performers were members of the Symphony and guest artists from San Francisco and Los Angeles areas. Soon after, Neumann Auditorium was built on the SRJC campus and the series was moved there. The anchor of the series was the Santa Rosa Piano Quartet: Polly Holbrook, Gerald Ogle, Shirley Chilcott and Norma Brown, but concerts included many others.
Norma and Corrick housed all the soloists who played with the orchestra. Corrick conducted the Pops Concerts as well as the Classical Concerts. The Browns’ musical influences extended to their three talented sons: Ryan played the violin, Derek, the cello and Keven, the piano.

When you join the League, you make a difference in the lives of 30,000 young musicians in Sonoma County.